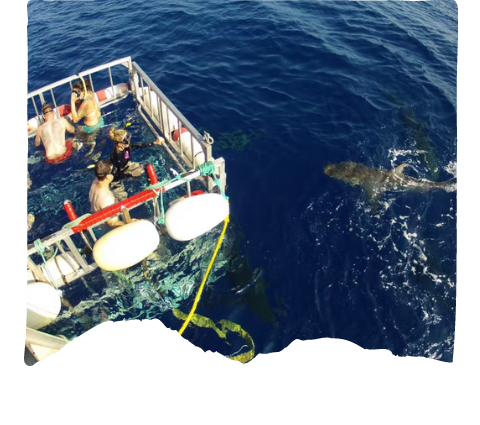 Looking to make your experience of Haleiwa truly unforgettable? Join us on our cage diving with sharks tour! We are the only cage diving experience on Oahu’s North Shore owned and operated by true Native Hawaiians. Our boat holds up to six people, and our tours are available daily. Just want to come along for the ride? We offer rider rates too if you don’t want to brave the cage! The tour consists of an hour and a half excursion in which you get to spend approximately 30+ minutes in the ocean with these beautiful and majestic creatures . While the tour is guaranteed to be exhilarating, you will also learn about the importance of sharks to our ecosystem. Your guide will be the first one in the water and the last one out after all the guests are safely back on the boat.

Looking for an adventure like no other? Then come join us on the North Shore Shark Adventure! This is your chance to get up close and personal with some of the most feared predators in the ocean – sharks! Our shark cage dive tour takes place on the North Shore of Oahu, where you’ll have the opportunity to see these amazing creatures up close. You’ll be safe in our shark-proof cage, but that doesn’t mean it won’t be an adrenaline-pumping experience! 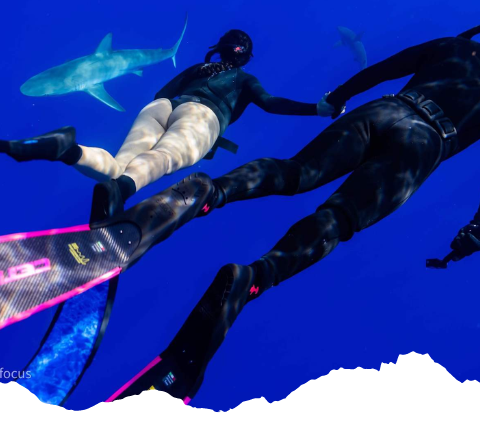 There are many beautiful places in Oahu, but for those looking to get their adrenaline pumping there's no better way than a snorkeling adventure with sharks! We'll take you off the North Shore and into clear blue waters where we can find Hawaiiʼs famous pelagic predators. While exploring this area of oceanic life - surrounded by pristine abyss- guests will have access top guidance from an experienced safety diver who knows all about what kinds Manō (Hawaii for Shark) inhabit these depths as well as how they behave when faced with potential prey or danger!

Sharks. They are such incredible and fascinating creatures. These underwater beasts have captivated us for as long as humans have walked the earth. We find them so intriguing and alluring that sharks have even been the focus of several Holly Wood blockbuster films.

So it is easy to understand why some people would want to get close to them (in a safe environment of course).

Getting in the water with these “killer” creatures is an exhilarating experience which is why shark diving on Oahu has become so popular over the years. Obviously, no one is put in any actual danger and you will always be accompanied by a qualified tour guide with experience around sharks.

Diving and Swimming With Sharks on Oahu

Sharks are not what most people expect them to be. In movies and on TV we always see sharks portrayed as these cold-blooded killing machines that want nothing more than to tear you apart.

But nothing could be farther from the truth. In most settings, sharks are actually very peaceful creatures and an important part of our ecosystem. They have gotten quite the bad rap over the last several decades.

The truth is, sharks really aren’t interested in attacking humans. They are more interested in eating seals and fish, which is so important for the health of our oceans. Sharks help to keep the fish population under control.

The shark population is dwindling dramatically. If sharks were to go extinct it would devastate the ecosystem. And not just of the ocean but for the entire world. Fish and other marine life would explode in numbers with nothing to keep them in check.

While shark diving on Oahu you will learn more about the importance of these predators and what their role is in our ecosystem. You will learn much about how sharks live and coexist with other marine life around Oahu.

What to Expect on Your Oahu Shark Diving Tour

Not sure what you can expect while on your shark diving tour?

There are plenty of guided tours for shark cage diving on Oahu, but we want to give you the experience of getting to swim freely among these magnificent creatures. As we have said before, sharks are very misunderstood.

On our tour, you will learn more about sharks, the waters here around the island, and how sharks thrive in the ecosystem. Our incredible guide will talk more about sharks including what types of species of sharks you can expect to see.

There are several different species that live in the ocean near our island including Galapagos, Sandbar, White-tip Reef, Tiger, and (arguably the most interesting to see) the Scalloped Hammerhead.

Our experienced guide will talk more about these species and some of the differences between them. Then you will get to swim with sharks in Oahu’s waters. Our guide will explain all of the necessary precautions and guidelines that you will need to follow before getting into the water.

All of our tours are subject to change as we continue to update and change our tours to ensure that you get the best possible experience. If you want to see everything that is included take a look at our current Oahu shark diving tour package.